OK !, Today I give a very big picture about that crucial term called “Ubiquitous Computing” and it’s relation to AI (YES, I mean Artificial Intelligence) . Actually, it’s a shame that any AI geek doesn’t know it. Just remember that, the word “Ubiquitous” means “Existing or being everywhere, or in all places, at the same time”.

What is Ubiquitous Computing?

I can say about Ubiquitous Computing (UbiComp) as “The Incorporation of computers into the background of human life without any physical interaction with them”. It’s considered the future third era of computing where the first era was the mainframes era and the second era is the personal computers era (what we are living now).   The term Ubiquitous Computing – also known as Calm Technology- was found by Mark Weiser -The father of Ubiquitous Computing- in the late 80s (so it’s not a new thing).

Even the most powerful notebook computer, with access to a worldwide information network, still focuses attention on a single box (the computer itself). However, Ubiquitous Computing means no human attention to any computer interface when using it. Take a look at motors technology which is considered ubiquitous; a glance through the shop manual of a typical automobile, for example, reveals twenty-two motors and twenty-five more solenoids. They start the engine, clean the windshield, lock and unlock the doors, and so on. By paying careful attention it might be possible to know whenever one activated a motor, but there would be no point to it. Similarly, computers in the Ubiquitous Computing era should be like that.

Suppose you want to lift a heavy object. You can call in your strong assistant to lift it for you, or you can be yourself made effortlessly, unconsciously, stronger and just lift it. There are times when both are good. Much of the past and current effort for better computers has been aimed at the former; ubiquitous computing aims at the latter. 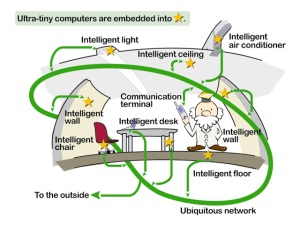 An Example for life with Ubiquitous Computing.

According to this essay, AI will play a major role in UbiComp in 3 different ways:

Shang, Yu Liang, The Role and Possibility of Artificial Intelligence in Ubiquitous Computing, 1993